I’ve heard a lot of good things about Ma Mon Luk and its famous mami. How many times I’ve seen it being featured on different local newspapers and magazine shows. I’ve wanted to try it but never had time to visit until my lakwatsera buddy, Grace, accompanied me and my fiancé. Even though I studied in the university belt area I’ll still get lost in Quiapo. I rarely visit here. Grace had been here several times. She warned me on the surroundings and the restaurant itself since they trying to maintain the old feel of the place but she guaranteed me that price will be worth it.

It was a rainy afternoon, tired from walking looking for an eye center in Recto area when we decided to eat at Ma Mon Luk. Grace step into a place with tables and chairs and my eyes were just looking all over the place. The place was a bit noisy with different people walking here and there and street vendors almost shouting to get attention. I asked her where’s Ma Mon Luk and she said here. I asked again exactly where. She said exactly where we’re standing. I didn’t notice the signage of the restaurant and there’s no door where one should enter. It’s literally open. If you’re after some neatly maintained restaurant and a little privacy while eating, well, this is not the place.

Nothing fancy inside. Walls were adorned by different framed magazine and newspaper where their restaurant had been featured both locally and internationally.

Old style ceiling fan. I wonder who’s older between the two of us. 🙂

We ordered mami (noodle soup) and siopao (steamed dumplings) which are their bestseller. We asked also for siomai (P40) since they’ve mentioned it’s also good but we’re told that it’s no longer available. Sold out for the day!

Mami noodles were different from the noodles I’m used to which I believe being made in a very traditional way. Plus I love the milky broth. Tasted very delicious.

And their siopao as well. Incomparable. Siopao never tasted that good. 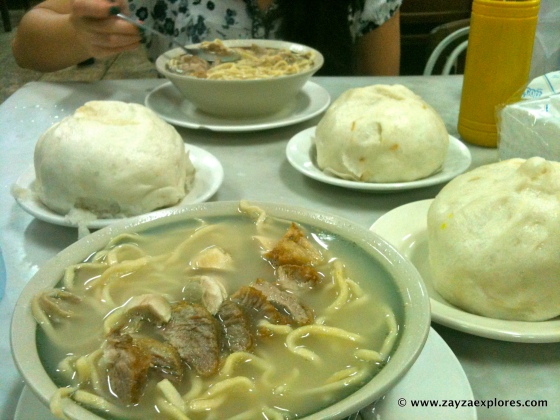 The combination of mami and siopao is perfect. After eating this two I’m already full, not able to finish my meal actually. I would really go back and hopefully able to try their siomai. It’s good that they were able to maintain the taste and authenticity of their food. Not using any artificial ingredients and food coloring. But I would love them to atleast improve their facility to serve their customers better specially their restroom. 🙂 From used to be 6 branches of Ma Mon Luk they’re now down now to two branches. One here in Quiapo, near Raon. The other one in Quezon City.